Get Active Running - Training on the Costa Blanca

In my quest for improved fitness I decided that spending an entire week with Donnie Campbell was a good idea – usually one hour a week is quite enough.

Day 1 – Tuesday
Sandra and myself were ready at 9am (as instructed) and after a 10-minute wait Charlie and Donnie eventually appeared.  This was the start of a bit of a theme for the week.  Anyway, within this ten minute window we learned all about the local toxic caterpillars and were warned to stay away from webs and dead foliage….!  You can imagine what followed for the rest of the week. 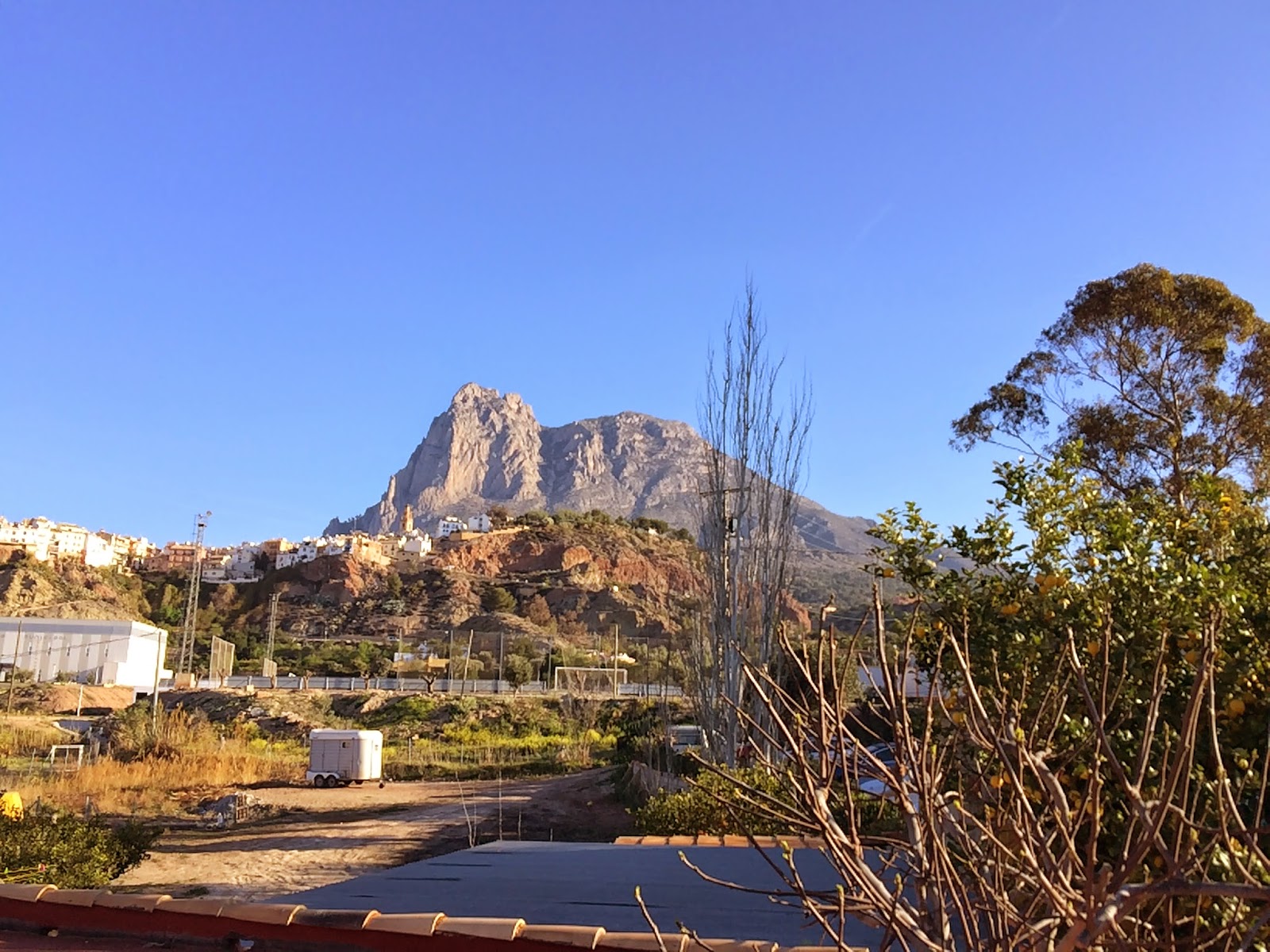 This is the Puig Campana and it is a Skyrunning Vertical Kilometre route.  It starts off nicely enough (not including the 2 miles uphill to get there) and then becomes a rocky scree filled scramble up an almost invisible trail.  I loved it!  Sandra wasn’t very comfortable on the steeper sections, but she held her nerve and got to the top.  We were rewarded with amazing views.  The descent off the summit was tough and rocky but the trail soon became a bit smoother.

The views were amazing wherever we were - it was odd being so close to Benidorm.

We were out for over 6 hours and only covered 18 miles in total.  The run was supposed to be longer, but we were all tired, it was a hot day and I hadn’t been drinking enough.  I also suspect the Sunday marathon PB had not done my legs any favours. 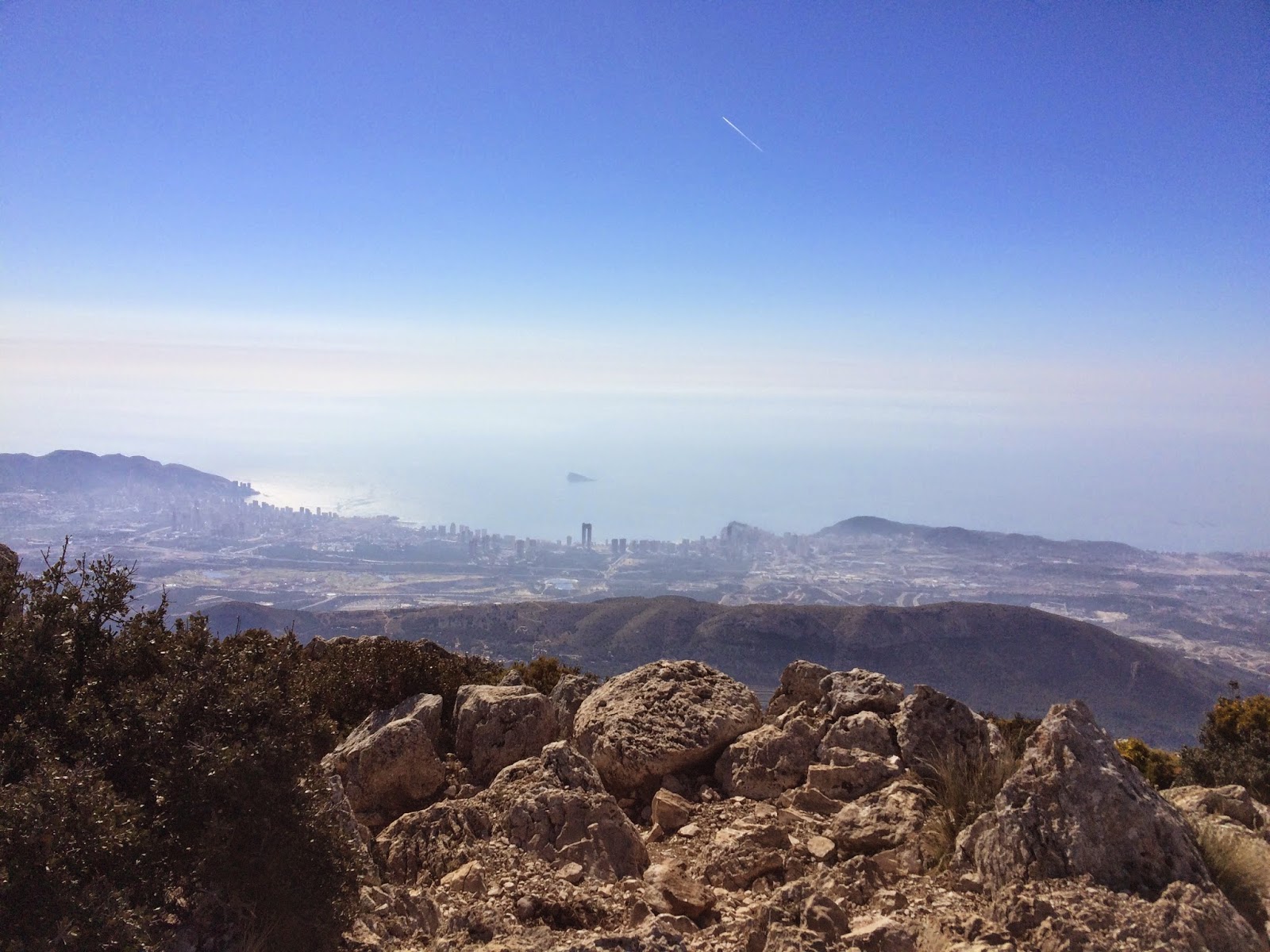 Day 2 – Wednesday
Today was going to be double day!  In the morning we were running to Sella where Donnie had left the car.  I had a much better run today and felt really good.  Saying that, we were only out for 3 hours and covered about 13 miles.  The mountain trails we were on were rocky and technical and really challenging.

After lunch we all set off in the car for a sunset run – spirits were high at this point.   There was a lot of up and for the first hour or so I was running really well.  Then the engine just died and I gave up.
It didn’t help that I had no idea how much further we had to go.  Every time we got to a peak on the ridge there was another one to be climbed just beyond it.  I don't really cope when the goal posts are moved (which Donnie knows fine well).  I had a "bit" of a strop at this point and it took another thirty minutes before I could even begin to contemplate cheering up.

We eventually made the top and began a steep rocky scramble down in the dark.  Before long we hit the trail and my legs came back to me and I was able to start running again.  I left Donnie and Charlie practicing running with their eyes closed (don't ask) and made it back to the car.  I think this was the night when I was very close to falling asleep on the sofa afterwards.

Day 3 – Thursday
This was going to be another long day and Charlie had a flight to catch so we had to be finished by 4pm.  Nothing like airport pressure during a long run!  We left the car and headed up a road, which turned into a land rover track, which eventually turned into a trail.  We went up, and up and up some more.  We soon came to a lovely ridge-line run that went on for ages.  The views all around were beautiful and there was hardly any wind.  The descent off this involved a lovely scree field that I happily plunged down whilst screaming away 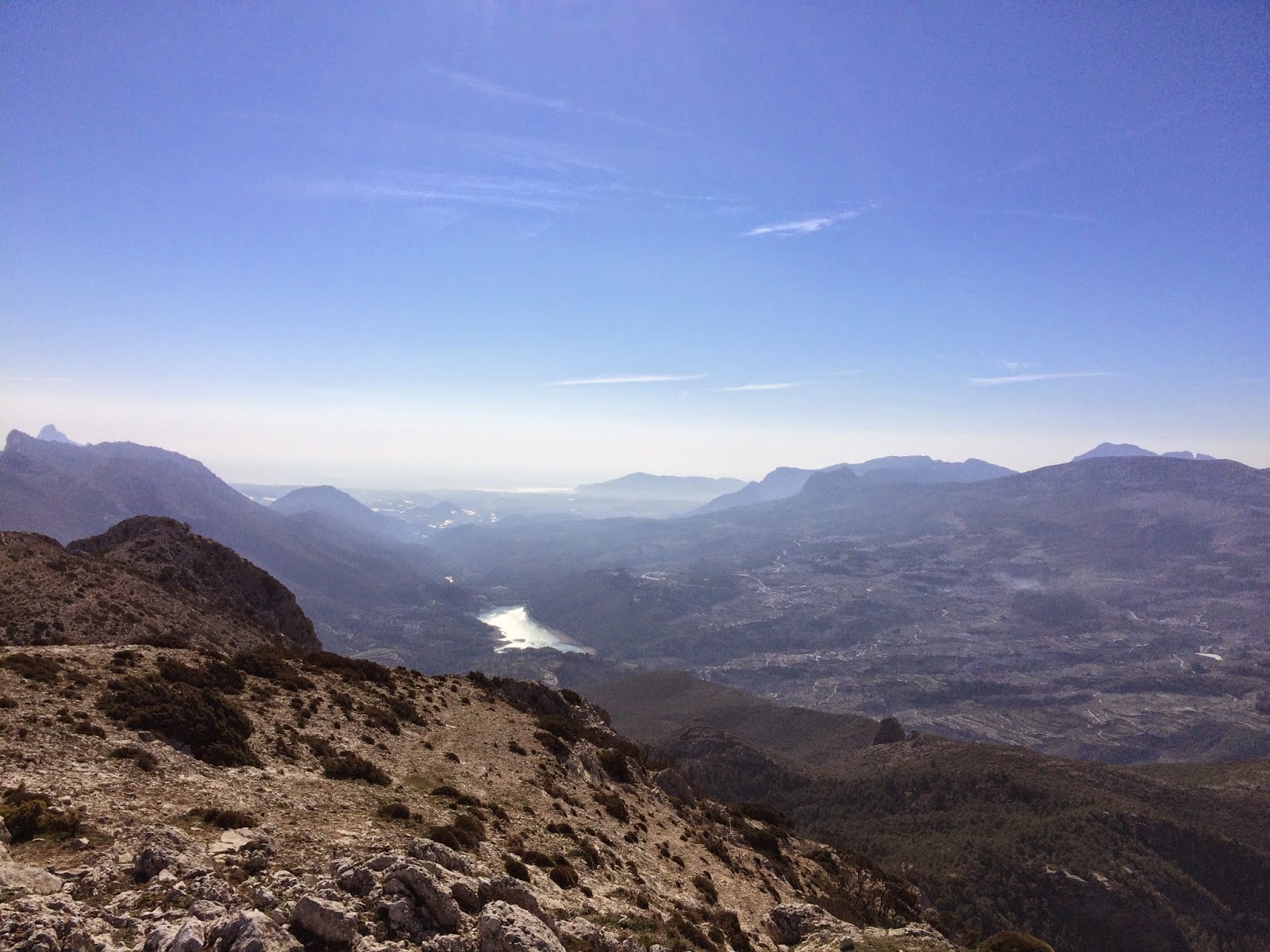 We were soon onto a section of the route that Donnie had not personally run before.  We found a single track road and it looked like this would follow the side of the mountain back to the main road.  Donnie and Charlie were running ahead when suddenly two huge dogs charged out of a nearby house and took an aggressive stance in the middle of the road.  Sandra followed me to relative safety behind a tree.  Eventually the owner appeared and got the psycho dogs under control.  We continued along the road for about 300 metres, then it just ended.  It was ok - Donnie had a plan!  If we climbed over the hill to our left we would be able to drop back down and join up with the main road.  We trudged to the top of the mountain hoping to pick up a trail, there wasn't one!

Donnie was still confident we would hit a trail so we started heading down.  The yellow Gorse was getting thicker and thicker and we were all in shorts.  The Gorse was tearing at my legs but we had no other option.  I tried to find the sparser sections but it wasn’t easy.  Donnie and Charlie were soon out of sight, but I could hear Sandra yelping behind me.  After about 2k, I could see a bit of a ditch ahead and a clear section after it. Donnie was shouting at me to try and make it through to where they were but I still couldn't see them.  I got to a drop off and it was filled with Gorse - there was a pine tree about 2ft away from me and I found myself attempting to jump onto the pine tree – I failed.  Eventually I stumbled out into a clearing quickly followed by Sandra.  We both sat down and began the task of clearing the thousands of thorns out of our trainers whilst laughing (slightly hysterically).   Donnie offered to get us Pizza that night and Sandra and myself were immediately on our feet.  We soon found a land rover track and that soon turned into a road.  Donnie sped off ahead leaving a trail of belongings for us to follow.  We all cheered when a white car appeared and it was him.  We stopped at a wee village for some sightseeing and to consider our shredded legs.

Back at the Villa Sandra and myself had a bit of a debate about who should shower first.  I won so Sandra had to go first.  I listened to the expletives whilst dreading my turn.

We said goodbye to Charlie and waited for Donnie to return with the Pizza.  We both decided to reward ourselves with a couple of glasses of wine.  Whilst the cat's away.....!

Day 4 – Friday
Sandra and myself were in for a treat – this had been billed as an “easy” day.  It turned out that this would involve a morning session of hill reps for an hour…..!  Donnie had found a suitably steep hill in Finestrat that he made us run up and down with his unique style of encouragement.  I pushed to pull ahead and make sure that Sandra and myself weren’t going up at the same time.  I figured that would ensure I only got 30minutes of “encouragement” rather than the full hour – the plan worked (sort of).

Donnie made an amazing salad for lunch and then we relaxed for a bit before we headed out again.  Sandra wasn’t feeling great and it wasn’t long before she was being sick.  She decided to head back to the Villa and go for a sleep.  I continued on with Donnie and we had a nice low level run.  I did get another opportunity to show my bravery during another mental dog incident.  I bravely ran behind Donnie!  I don’t like dogs – give me an angry cow any day!
Day 5 – Saturday
Last day and the forecast wasn’t great.  Donnie and myself headed up for a last VK whilst Sandra ran around the mountain.  Donnie took me on a proper scrambling route this time.  Being the gentleman, he climbed behind me in case I fell.  I'm not sure how this would have helped as I'm fairly sure I would have just taken him out on my way down.  We got to the top of the Puig Campana and the rain started.   Sandra called to say she was heading back to the Villa rather than stay out in it.  We came off the mountain and started climbing again – at this point it started to snow!  I was starting to chill rapidly and lost all feeling in my hands.  At my request we turned back and planned to run the rest of the route missing the peaks.  The rain got heavier and we decided to cut the run short rather to stay out drenched and cold.

We found ourselves on a nice trail – I picked up speed and started flying down the trail – we came to a 2ft drop off and I jumped, landed it and sped off.  Another drop off came and went, I was feeling confident and enjoying the pace.  We got to a third drop and just as I loaded my take off leg my foot slipped on the wet rock.  Suddenly I was heading over the drop sideways and headfirst.  I definitely remember thinking that this was going to be bad.  Somehow I managed to bring my trailing leg forward and under me allowing it to take most of the impact.  I landed sitting upright in a pile of rocks.  It took me 3 seconds to realize that I wasn’t hurt – I let out a cheer and leapt up to my feet.  Donnie had actually gone quiet and looked really relieved that I was ok.  He told me that he was quite impressed I had managed to land it as he had seen my head heading towards the rocks.   I think he had been imagaining having to carry me off the hill.

I slowed down considerably for the rest of the descent – the running Gods had sent me a warning and I was going to heed it.  I only picked up the pace when we got to the road and we powered through Finestrat in the pouring rain.

Donnie went out for another hill run in the afternoon, but after the earlier fall and my increasingly unstable ankle I decided to give it a miss.  Instead myself and Sandra combined a 5k run with sightseeing and cross training!  We got more than a few bemused and often suspicious looks from the locals (can’t imagine why).

That night we got a treat - we were off to Benidorm!  Don't worry, it was Tapas and Sangria, rather that Shots and dancing!

Day 6 - Sunday
I was so sad to be heading home - I loved my week of training, eating and sleeping!  Donnie had done an excellent job of cooking for us, training us and making sure we didn't get up to any mischief. 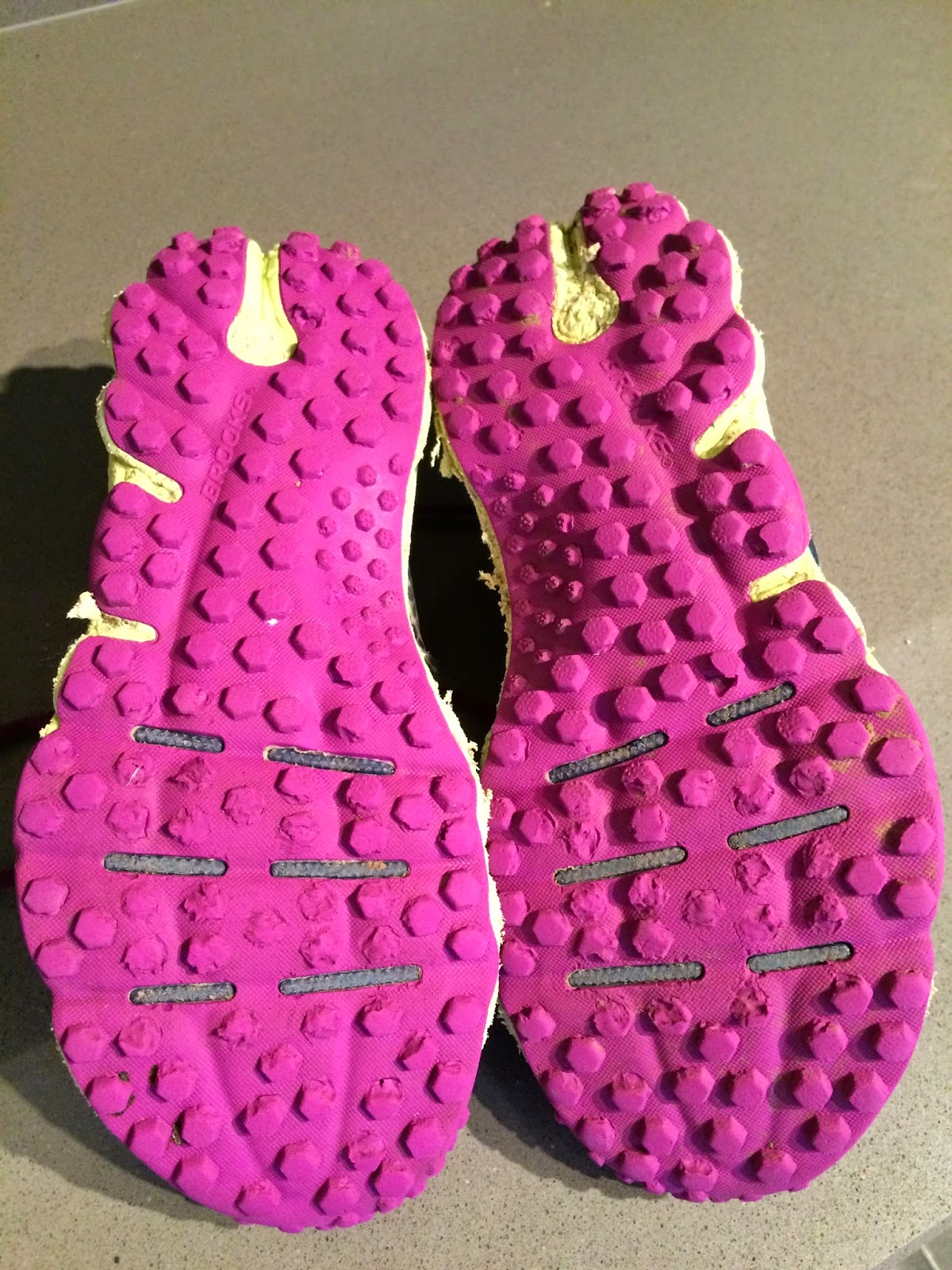 I’m definitely coming back next year – although I will do one thing differently – I will bring my oldest pair of trail shoes as the rocks out here eat them.  My Brooks Pure Grit 3s were amazing to run in but I seemed to have left a lot of the grip behind.

Keziah
Former runner, current mountain biker - just doing what I can to be in the hills as much as possible.